Sales point
Buy your tickets online!
Accommodations
Where to stay in Cully and the Lavaux region
Getting to & from Cully
Favour the public transport!
Disability services & access
Information to festival-goers with disabilities
Shop
Have a look at our shop!
Gift token
Offer a gift token!
Newsletter
Subscribe to our newsletter !
Programme
More news

Poster and first names of our 37th edition

New gem of the English Jazz scene, saxophonist Nubya Garcia’s first two projects brilliantly revealed her to the world. «Nubya’s 5ive» and «When We Are» push modal jazz towards a stunning afro-groove, borrowing here and there a few hip-hop breaks and Caribbean sonorities that reflect her origins and family culture. Two meticulous EPs, produced by some of the best musicians in London, from pianist Joe-Armon Jones to bass player Dan Casimir, drummers Femi Koloeso and Moses Boyd. After having roamed the clubs alongside numerous outfits, Nubya Garcia finally affirms herself as a composer and leader of a full-blown project that will keep people talking for the months to come.

One bass. One particular groove. An outstanding musician, a pioneer of jazz-rock and jazz fusion, notably with his legendary band Return to Forever alongside Chick Corea, Stanley Clarke has established himself as a key figure in jazz and one of the greatest bassists in the world. A virtuoso with unrivaled technique, and genius of composition recognised through four Grammy Awards, Stanley Clarke has influenced a generation of musicians by becoming one of the few bass players to lead in performances with his bands. In Cully, he will be surrounded by young talents for a funk show with relentless energy.

Anne Paceo comes back to Cully with her new album «Bright Shadows». Her orchestration and aesthetics, an escape through electric emanations, are expertly imagined by the French drummer.

Legendary Hammond organist, Rhoda Scott has decided to celebrate her 80th birthday with an upbeat and energetic show for which she has surrounded herself with a nearly exclusively feminine all-star, including drummers Anne Paceo and Julie Saury, saxophonists Géraldine Laurent, Lisa Cat-Berro and Sophie Alour, as well as trumpetist Julien Alour.
Born in New Jersey, Rhoda Scott was brought up on blues and gospel, before being noticed by Count Basie. She moved to France on Eddie Barclay’s invitation and went on to record many albums with him. “The barefoot organist” is an emblematic figure of jazz and a spokesperson for more women in the genre. «We Free Queens», the distinctively swing album recorded with the sextet feels like a manifesto. After touring the largest French festivals and receiving a Victoire du Jazz, Scott has finally decided to bring her Ladies All Star to Switzerland for the very first time.

The Lavaux-Cully-Jazz Foundation organises its traditional Fundraising evening event on Sunday 7th of April 2019, with a dinner at the Resto, the restaurant of the Festival, and a ticket for the Rhoda Scott Ladies All Star concert at the Chapiteau.
More information. 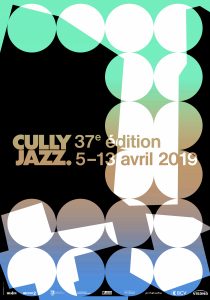 In 2018, Alice Franchetti and Giliane Cachin designed the festival’s new visual identity. It melds two notions dear to Cully Jazz: the sense of place of the festival, its location, and the music, represented by maps and geometric shapes. The designers rely on these two elements to make the Festival shine in its own world and create striking images in the urban setting. Based on what they have already developed, the designers worked on creating variations of these two aspects. Location is represented here by a map of the streets of Cully. They used a pattern of circles to bring out the structure of the map, with the circles representing music.

Inspired by the idea of an everchanging landscape that shifts with the light and reflections of the lake, they worked with a screen-printer to develop a gradation of three base colours.